Read Lorna Crozier's article at Toque & Canoe
WHAT THE GARDEN HOLDS
A travelling poet reflects on wonder and loss. 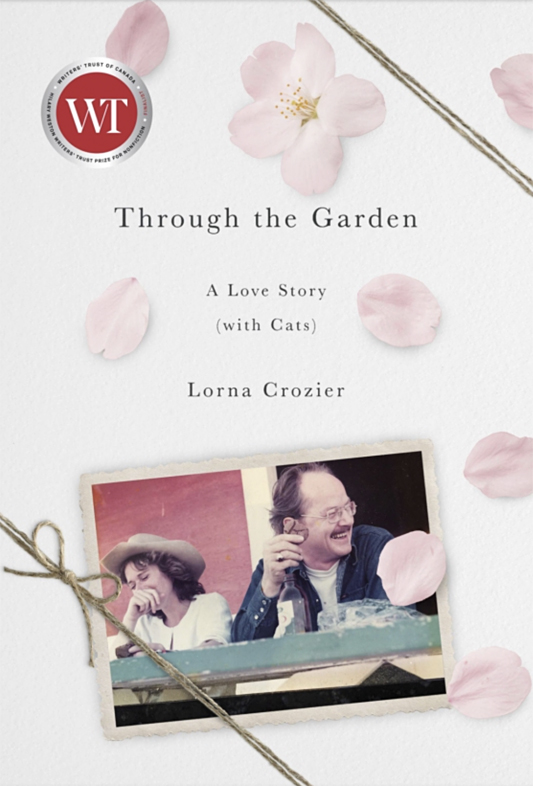 Available now
THROUGH THE GARDEN
For details and to buy e-book and audio book visit Penguin Random House Canada. Hardcover available at link above, as well as at your local independent bookstore. The audio book is read by Lorna Crozier.
A powerful, deeply affecting portrait of a long marriage and a clear-eyed account of the impact of grief, writing as consolation, and the enduring significance of poetry from one of Canada's most celebrated voices. 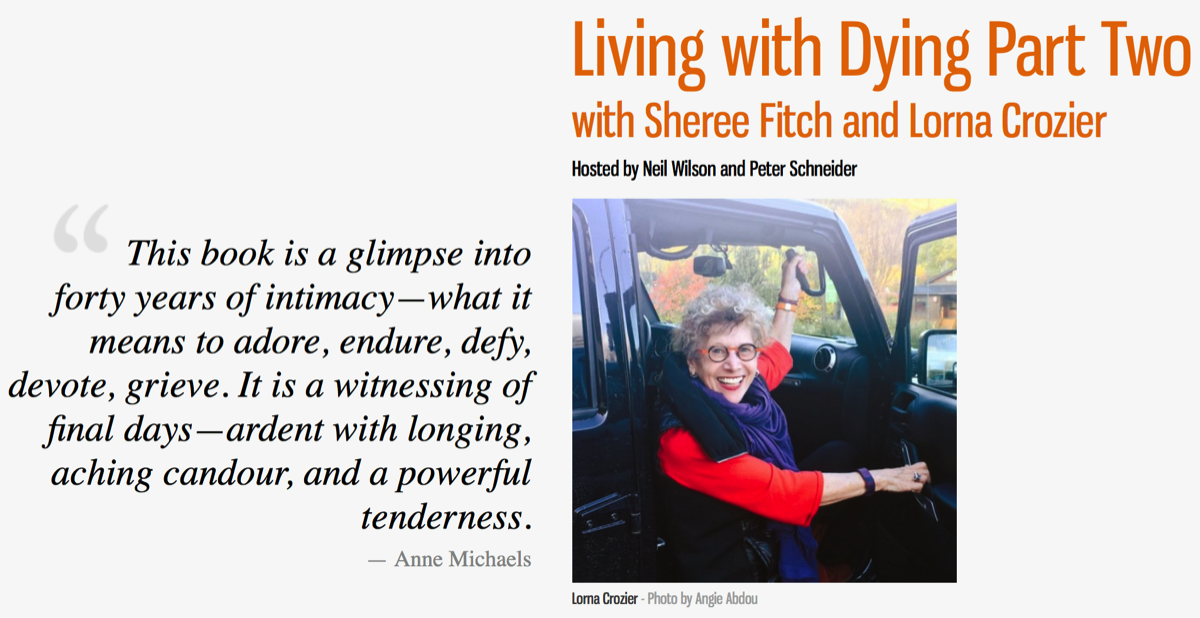 Listen to a podcast from the Ottawa Writers Festival. Sheree Fitch speaks with Lorna Crozier

Two new poems (April 2020) from Lorna Crozier are online at The Typescript. 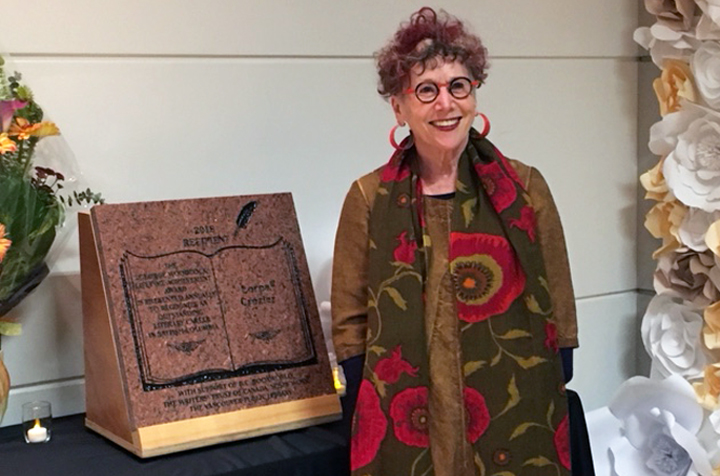 The 2018 George Woodcock Lifetime Achievement Award, BC’s most prestigious literary honour, was presented to Lorna on June 28, 2018 in Vancouver. On this occasion, she was also inducted in the Vancouver Public Library’s Writers Walk of Fame. Read the article here.

is about to nudge its way into life, when it’s pausing on the border between silence and being, it’s as if the whole body has grown antennae. Rumi writes, “You’re in the body like a plant is solid on the ground / yet you’re the wind.” He’s speaking of spiritual ecstasy, but I think inspiration is just another form of that. As the poem starts to take shape, before you put the pen to the page or your fingers on the keys, light particularizes around you. You notice how it silvers each of the cat’s whiskers, how it gracefully slides around the corners of the old stove, how it ignites the green in the moss around the pond. The same wind has been blowing all week but suddenly you sense it’s trying to get a word in and the aspen leaves are ready to reply. You know this is not simply your imagination pushing you into anthropomorphic inventions. You’re getting in touch with what’s really out there. Warm-blooded and on the edge, something is shaping itself into the bones and sinews of nouns, the muscles of verbs, as if you the writer were of minor importance, as if you must give yourself up, move aside for this new creature to show itself, for it to come tentatively into the light cast by your mind, your heart, your strange imaginings. The poem steps close to you. It shows its wild face.
— from the Margaret Laurence Lecture, 2013
“What a joy to have a volume of selected poems by this marvellous Canadian poet, storyteller, truth-teller, visionary.”
—Ursula LeGuin, June 3rd, 2007 writing on The Blue Hour of the Day, from The New York Times Book Review

Crozier's poetry is witty, poignant, beautifully plain spoken narrative with startlingly clear moments of revelation, quick, deep Alice Munro like glances into our very nature.  It is like meeting someone with small town manners and common sense as well as big city savvy.
—Michael Dennis, michaeldennispoet.blogspot.ca 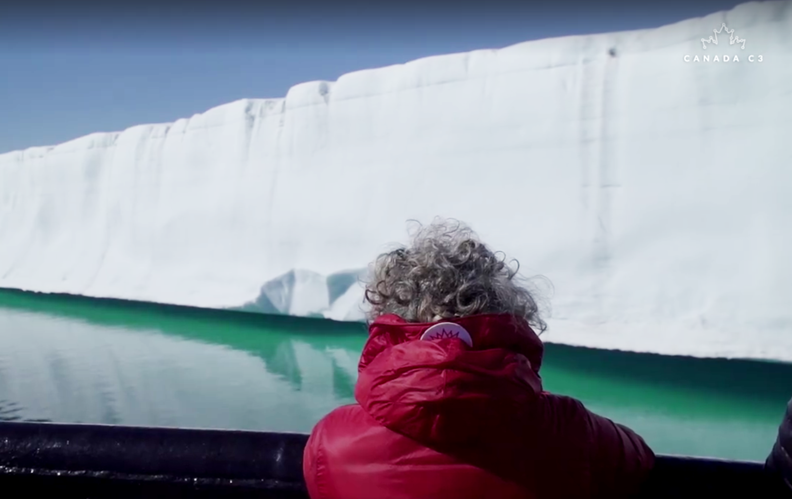 In July 2017, Lorna joined the crew and guests for Leg 7 of the Canada C3 journey. She wrote a poem, “Polar,” after sailing beside a massive iceberg. The poem was set to video and music and can be seen here. 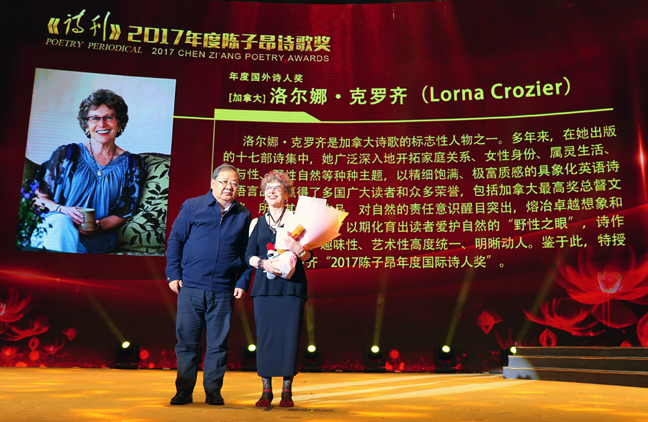 In March 2018, Lorna Crozier received the Chen Zi Ang Poetry Periodical International Poet Award in Sui Ning, China. Sui Ning is the birthplace of Chen Zi Ang, a famous Tang poet who rallied for unadorned, plain speaking in poetry. He was the precursor of Tu Fu and Li Po and had a tremendous influence on their work. The award is for a variety of my poems selected from different books and translated into Chinese. They appeared in China’s most prestigious magazine, Beijing’s Poetry Periodical, in 2017.
In October 2016, Lorna Crozier was invited to take part in poetry festivals in China . Here are some photos of the trip. 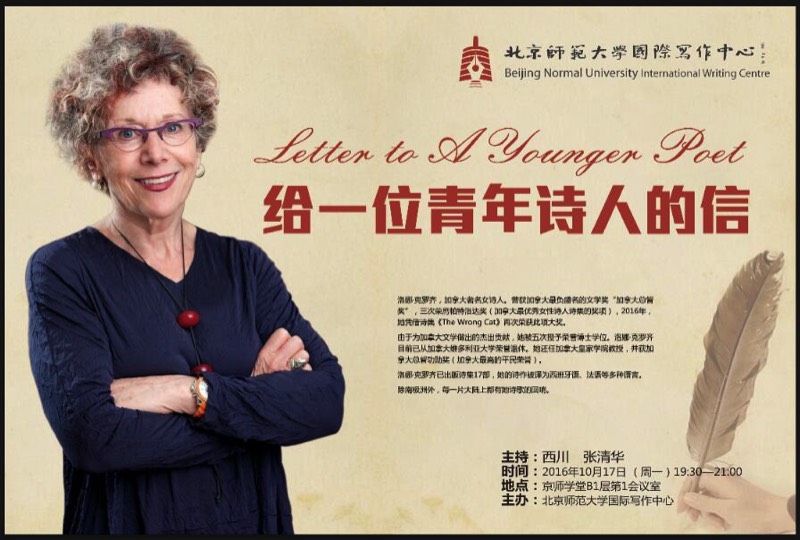 A trip to Fogo Island for Toque and Canoe resulted in an article about what it's like to visit this magical place. photo: Alex Fradkin/courtesy of Fogo Island Inn 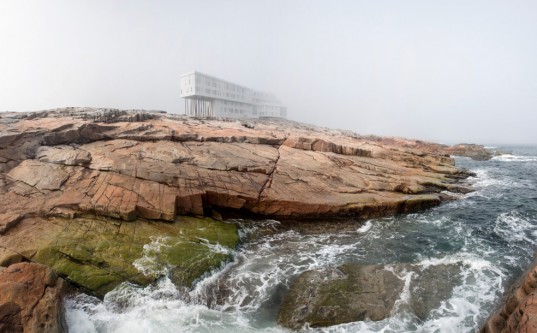 NEWS
OCTOBER 2020
Through the Garden a finalist for the 10th Annual Hilary Weston Writers’ Trust Prize for Nonfiction. Winner to be announced on November 18 via the digital Writers’ Trust Awards: Books of the Year Edition.

SEPTEMBER 2020
The House the Spirit Builds a finalist for the Victoria Book Prize. The online gala on October 4 at 7pm is free, but you must register.
Details here.

MAY 9, 2020
A Gala to Save the Birds
Lorna Crozier, Margaret Atwood, Trevor Herriot and others too part in an online gala fundraiser for Pelee Island Bird Observatory

SEPTEMBER 2019
God of Shadows one of this year's five finalists for the Victoria Butler Book Prize.

AUGUST 2019
The House the Spirit Builds by Lorna Crozier, with photography by Peter Coffman and Diane Laundy to be released in September 2019. Douglas & McIntyre 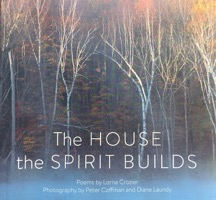 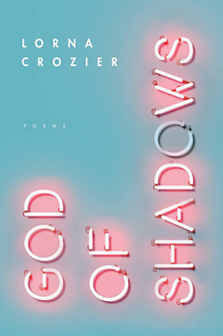 OCTOBER 2017
What the Soul Doesn't Want nominated for the Governor General's Award for Poetry.

JUNE 2016
The Wrong Cat wins both the Raymond Souster Award and the Pat Lowther Award.

Read an interview with Lorna about The Wild in You, over at Eco-Fiction.com 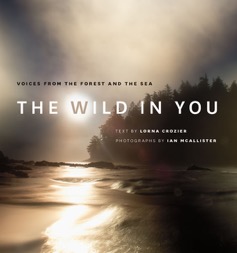 CLICK TO BUY ONLINE
OR ASK YOUR FAVOURITE BOOKSELLER

The Wild in You: Voices from the Forest and the Sea, a collaboration with photographer Ian McAllister

“Crozier writes of a world of imperfection, clumsiness, violence, betrayal, pain, and in spite of everything, delight and love….Always accessible, Crozier speaks a language we understand, but she uses it to tell us things we don’t.”
—Canadian Literature

“Lorna Crozier’s The Blue Hour of the Day... reads like one long autobiographical poem of astonishing coherence and beauty, and so powerful that, after I'd closed the book, I found that I'd unwittingly learnt several of the lines by heart.”
—Alberto Manguel, November 30, 2007, from The London Times Literary Supplement

Toronto International Festival of Authors Virtual Book Club
April 21, 3pm PST Through the Garden: A Love Story (with Cats)
The official TIFA Book Club is back for 2021, in a virtual format, with two new seasons of exciting and empowering reading lists. The spring season is sold out.

Saskatchewan Writers’ Guild Lecture Series
February 18, 6pm PST
The Saskatchewan Writers’ Guild is excited to present Well-Versed: A Lecture Series. This virtual series, presented between February – June 2021, will host well-established Canadian writers who will speak about what they have learned as a writer. The first lecture will feature Lorna Crozier.

Please register to receive your link to this free virtual event here.